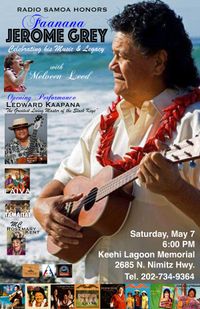 Fa'anana JEROME GREY,- in Concert, Honolulu Hawaii. Saturday, May 7, 2022 6:00 PM Keehi Lagoon Memorial 2685 N. Nimitz Hwy. This is Fa’anana Jerome Grey’s only concert in Honolulu this year. A Legend who composed some of the most iconic music of the South Seas, and has dedicated his life to promote and perpetuate music of Samoa and Polynesia around the world. Some have described Jerome as a cross between Frank Sinatra and Jean Gabilou of Tahiti except Jerome sings in several languages. Jerome will be joined by Melveen Leed, a Legend with an international reach that spans across Europe, the Pacific and throughout Asia. Melveen is a multi-talented vocalist, musician, songwriter, and actress. Melveen’s impressive and extraordinary entertainment accomplishments include: 24 albums, Performed for world leaders, notably: former President Barrack Obama, King and Queen of Tonga, the Head of State of (W)Samoa, and the President of French Polynesia. 11 Na Hoku Hanohano Awards including 5 for Female Vocalist of the Year and Lifetime; 2015 “Aloha Is” from the Hawaii Academy of Recording Artists; 2014 “Miss Aloha Ambassador” of Hawaii Seniors Fair of the Good Life Expo; and PPSEWA Lifetime Achievement Award, 2018, Just to name a few. Opening for Jerome is a global icon and Hawaiian Legend, Ledward Kaapana, of the legendary group,- “Hui O Hana”, and the greatest living master of the slack keys. He is a Grammy Award nominee, member of the Hawaii Music Hall of Fame and a multi Na Hoku Awards winner. Also performing will be FAIVA, and Jerome Grey’s dancers. Mistress of Ceremonies will be Rosemary Kent, the legendary voice of American Samoa on Radio (WVUV Radio) and Television (KVZK-TV). For more information (Phone number is on the Poster) (Limited tickets)